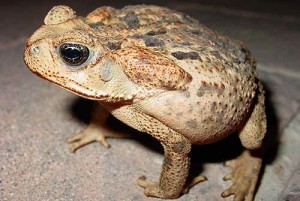 There are at least nine species of toads, which can poison your dog or cat. The only one of real significance in this area (southern Florida) is the one, which will be discussed below. In the summer months local animal emergency clinics receive two or three calls per night with regard to toad poisoning.

A typical animal case report involves a dog or cat that finds a slow hopping toad and mouths the animal playfully. The pet usually experiences immediate salivation and irritation of the mucus membranes of the mouth and throat. If the pet eats the toad or otherwise receives a large quantity to toxin, vomiting, seizures and death may follow in as little as 15 minutes. Even a toad that sits in a dog’s watering dish for some time may leave enough toxin to make the pet ill. Although the toxicity varies considerably by the toad species and its geographic location, the death rate for untreated animals exposed to Cane Toads is nearly 100% in Florida.

This large toad is found in Southern Florida and is seen most frequently during warmer and wetter months of the year. Originally released in Florida’s sugar cane fields in 1935 to help control rats and mice, it is now commonly found in South Florida yards. It breeds year round in standing water, streams, canals and ditches. A female can lay       35, 000 eggs in one season. It lives primarily on roaches, beetles and other large insects. It is rather sluggish, hopping only when bothered or when seeking new feeding grounds…usually in the early evenings. When the toad is threatened, it secretes a highly toxic milky substance from the glands in the back of its head. This secretion will burn eyes, may inflame the skin and can kill dogs and cats if ingested. When a dog or cat bites the toad, the poison enters the animal’s system rapidly through the membranes of the mouth and the effects will be seen almost immediately.

Size-adults range in size from 4-9 inches. Color-brown to grayish brown with creamy yellow belly. Glands-parotid glands (large oval protrusions) start at the shoulder and extend down 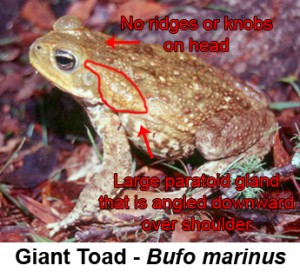 Degree of development of symptoms and their severity is dependent upon the amount of material absorbed. The basic symptoms are as follows:

1. Profuse salivation (drooling) is seen immediately.
2. Constant head shaking occurs with the salivation.
3. Crying as if in pain may sometimes be noted.
4. Lack of coordination and staggering will occur in moderate intoxication.
5. Inability to stand or walk develops with more serious poisoning.
6. Convulsions and death can occur in very serious cases.

There are several other substances that may affect dogs in a similar manner. Therefore, it is very important to know if at all possible, whether it is likely that exposure to toads of this species have occurred just prior to the onset of symptoms.

If you know or strongly suspect that this toad has poisoned your dog or cat, IMMEDIATELY flush out his mouth with water. Rinse the animal’s mouth for approximately five minutes. One way to do this is with a wet washcloth where the water will drain out of the mouth instead of down its throat. An alternative is the use of a garden hose for continuous flow provided you are very careful not to choke or drown the animal. Extreme care should be taken that the animal does not swallow the rinse water.

At present, no medicines commonly found in the home are considered of any value in first aid treatment of this condition. It is important to obtain the services of your veterinarian to give specific antidotes by injection as soon as possible, especially when there is any doubt about how severely poisoned your pet may be. Remember, too, that the smaller the dog or cat, the greater the possibility of serious toxicity. Call your veterinarian as soon as you finish washing the mouth but since many toad poisonings occur in the evening or night time hours, call your nearest animal emergency clinic for assistance.

Names by which this toad is recognized: cane toad, marine toad, giant toad and bufo toad.