Give Your Furry Friend Love, Not Chocolate

Sharing your love by giving chocolate to your furkid on Valentine’s Day or Halloween and you could end up poisoning them. That is, if the loved ones include any pets. Even small amount of theobromine, an ingredient in chocolate, can cause vomiting and restlessness in pets. Larger doses can be fatal.

The Journal of the American Animal Hospital Association reported that a springer spaniel died from accidental theobromine poisoning after eating a 2-pound bag of chocolate chips. Unaware of theobromine hazards, the dog’s owner did not seek veterinary care until it was too late. The pet became agitated, lost its bladder control and developed seizures. Less than 18 hours after eating the chocolate, the animal died.

While most pet owners expect a dog to develop an upset stomach after eating a large amount of chocolate, few realize its toxic potential. When pets are finally taken to veterinarians, they are often in more advanced states than if they had eaten something obviously toxic, like rat poison.

The lethal dose of theobromine depends on the size of the dog and the type of chocolate. Ounce for ounce, baking chocolate has six to nine times as much of the substance as milk chocolate. Estimates of the smallest amounts that can be fatal are:

Cats have much different eating habits and seldom are poisoned by chocolate.

While a very small amount of chocolate may not harm some dogs, it’s safest to avoid giving it to them at all. If an accident occurs, consult your veterinarian immediately. Treatment may require inducing vomiting, stabilizing the animal’s heartbeat and respiration, controlling seizures and slowing the absorption of theobromine. If the animal already is comatose, its stomach may need to be pumped.

Keeping the chocolate out of harm’s way is the loving thing to do.

Going trick-or-treating with your pet? Be sure both of you wear reflectors for safety. Watch your pet for signs of stress (heavy panting and anxious expression). And be kind: don’t share your Halloween candy with your pet. An upset stomach can occur, or even worse, your pet can get poisoned from too much chocolate.

Other than that, have a howlin’ good time! 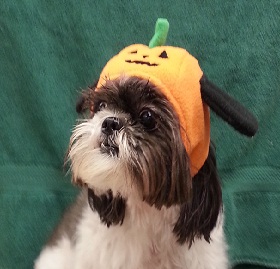 We have a great assortment of Halloween costumes and halloween themed toys for your pet available every October. Check them out.

If you take a few simple precautions, Halloween can be fun and safe for both you and your pet. It’s another way to treat your pet as part of the family.

Picking out a special costume to dress up your pet and take him trick-or-treating is lots of fun. Make it a special adventure for you both. Take your pet with you only if he enjoys other people and strange sights and sounds. Keep him on a leash at all times. Fit his costume so that it is comfortable and be sure to supervise him so he doesn’t get tangled up in any part of it. When you’re walking in the dark, be careful to wear something reflective or flashing so that motorists will see both of you. And remember that all of the goodies you receive are for you alone; candy, and especially chocolate, can be harmful to pets. You can pick up some dog safe cookies at Harmony so your pet doesn’t feel left out! 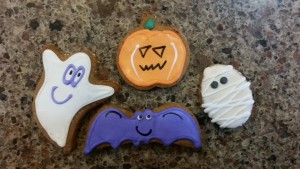