The adrenal gland is responsible for many important functions. One key function is to produce adrenaline (epinephrine). Adrenaline helps the body respond to life-threatening situations and is the key driver of the fight or flight response. The glands also produce a critical hormone known as cortisol. Cortisol assists in regulating blood sugar and in metabolizing protein, fat and carbohydrates; it is also an immune regulator. Finally, the adrenal gland also produces relatively small amounts of reproductive hormones and their precursors.

What is Adrenal Disease?

Ferrets get a Different Type of Adrenal Disease

The type of adrenal disease that ferrets get is different to that seen in people and dogs. In ferrets it is the reproductive hormones that are overproduced with overactive adrenal glands. The glands may be overactive due to hypertrophy (exaggerated growth), benign tumors or a malignant form of cancer. Without a surgical biopsy or gland removal and pathology, determining which of the three causes of adrenal disease a ferret has is difficult to impossible.

What are the Clinical Signs (Symptoms) of Adrenal Disease in Ferrets?

The increased amounts of circulating reproductive hormones lead to one or more of the following clinical signs in ferrets:

How is Adrenal Disease Diagnosed?

While the symptoms of adrenal disease in ferrets are fairly characteristic, it is important to allow your veterinarian to perform additional diagnostic tests to help confirm the diagnosis and determine your pet’s overall health. In any middle aged or older ferret, whether there are signs of illness or not, your veterinarian will likely suggest a complete blood count (CBC) and chemistry panel. These tests don’t diagnose specific diseases; however, they give an overall picture of health by assessing liver and kidney health as well as monitoring for anemia and signs of infection. There are two tests available to specifically diagnose adrenal disease itself:

How is Adrenal Disease Treated?

Broadly speaking there are two main ways to treat ferret adrenal disease: medical or surgical management. The decision as to which to use is made between the veterinarian and the pet owner by considering the following factors: The ferret’s age and sex, the disease and symptoms, presence of additional diseases, affected gland(s) (left, right or both), owner’s desire for cure versus control, risks of surgery, possible complications during and after surgery, and willingness to tolerate possible recurrence or disease of opposite gland if surgery is performed. 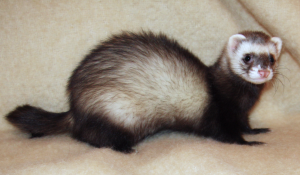 Lupron (leuprolide): Lupron has been a mainstay of medical management for several years. This medication is generally effective in controlling clinical signs when given to ferrets by injection once a month. Lupron helps to reduce the hormone-induced aspects of adrenal disease, such as fur loss, estrogen-induced anemia and prostate disease. Lupron is essentially a synthetic hormone, and over time the ferret’s body may recognize this substance as foreign and create antibodies against it, thereby reducing its effectiveness.

Deslorelin: This drug is similar to Lupron, although it is available in a longer-term implant (8-12 months).

Melatonin: The use of oral melatonin has been studied in ferrets and it has proven effective in treating the clinical signs and hormonal changes seen with this disease. One problem with its use, however, is the lack of regulation of melatonin manufacture in the U.S. As such it can be difficult to be certain that the ferret is gaining the benefit it should from this drug. As an alternative, a melatonin implant is available to veterinarians in the U.S. This product is being actively researched and initial reports are very promising as to this product’s ability to improve fur loss and the hormonal status of ferrets with adrenal disease.

Treating adrenal disease requires a commitment on the owner’s behalf and teamwork between the owner and their veterinarian.