Be careful how you deck your halls! The holiday season is generally a time of family togetherness in which even our pets participate. One’s thoughts generally are far from thoughts of injury; however, one must be aware of some important seasonal hazards in order to insure a happy holiday season.

These are of special interest to playful cats and kittens who see these materials as toys (or prey) to be chased, pounced upon, chewed or swallowed. While chasing and pouncing pose no health threats, chewing and swallowing do, as these strings or “linear foreign bodies” can catch in the GI tract, leading to bunching of intestine as the body tries in vain to move the string or ribbon through. This is a life-threatening condition requiring surgery for correction. 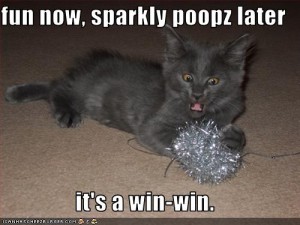 These are also tempting to cats who like to play with string as well as to puppies who are teething and interested in chewing. If a pet bites through an electrical cord, it could result in a severe burn to the tongue, which causes the pet’s lung to fill with fluid, causing respiratory distress. This is also an emergency requiring immediate veterinary attention.

Many people do not realize that chocolate can be a poison. Unsweetened baking chocolate carries a much higher dose of the toxin “theobromine” than does milk chocolate, but even normal milk chocolate can be dangerous; a small dog sharing candy can wind up in big trouble. Clinical signs of chocolate poisoning include hyperexcitability, nervousness, vomiting, and diarrhea and death.

Consuming this festive-looking plant can be irritating to the mouth and stomach of the dog or cat that chews on or eats it. Contrary to popular belief, poinsettia is not especially toxic.

MISTLETOE
The fact that there are several types of mistletoe makes it difficult to predict the clinical signs of poisoning. Some mistletoes produce only stomach upset while others may lead to liver failure or seizuring. Consider mistletoe to be a hazardous substance and keep it inaccessible to pets and children.

COOKING
Keep pets out of the kitchen during the hustle and bustle of the season. The last thing you want is for someone you love to get underfoot and burned from spillage.

DIETARY INDISCRETION
We all like to include our pets in Holiday meals along with the rest of the family, but try to keep in mind that sudden rich diet changes are likely to upset a pet’s stomach. Vomiting and diarrhea are not uncommon. If leftovers are of an especially fatty nature, the pancreas become inflamed and overloaded. This condition is serious and may require hospitalization

Because alcohol is rapidly absorbed into the bloodstream, it affects pets quickly. Ingestion of alcohol can cause dangerous drops in blood sugar, blood pressure and body temperature. Intoxicated animals can experience seizures and respiratory failure. Additionally, foods such as desserts containing alcohol and unbaked dough that contains yeast should be kept away from pets as they may result in alcohol toxicity, vomiting, disorientation and stomach bloat.

Recently, imported snow globes were found to contain antifreeze (ethylene glycol.) As little as one teaspoon of antifreeze when ingested by a cat or a tablespoon or two for a dog (depending on their size), can be fatal. Signs of early poisoning include acting drunk or uncoordinated, excessive thirst, and lethargy. While signs may seem to improve after eight to twelve hours, internal damage is actually worsening, and crystals develop in the kidneys resulting in acute kidney failure. Immediate treatment with an antidote is vital.